Email ThisBlogThis!Share to TwitterShare to FacebookShare to Pinterest
Vitamin greens, aka vitaminna, were new to me when we received them in one of our weekly CSA produce boxes last month. I thought I knew my greens, but had never heard of this particular type.

The name struck me as rather silly and unfortunate:  Silly because greens in general are known to be rich in vitamins and minerals; unfortunate because such a "healthy" sounding name likely dooms them to being prejudged as "gross" by most children and never given a chance by many adults.

After tasting vitamin greens, I think a name like "sweet greens" or even "sweet cabbage" would have been far better -- after all, we do have "sweet peas" and "sweet onions," both of which often are preferred over their "non-sweet" siblings by most people.

Much like bok choy, Vitaminna has large, thick, dark green leaves and long, thick stems. In fact, it's a relative of bok choy and other Chinese cabbages. You can cook vitaminna just as you do any leafy green, and not only is it sweeter (milder) in flavor but it also doesn't leave your teeth feeling weird or chalky the way cooked spinach and chard can do.

The following may not be the most health-conscious way to prepare Vitamin Greens, but if you're following a paleo or high protein diet, aren't very concerned about fat, or simply want to indulge in a guilty pleasure, like I did -- it's deeply satisfying in flavors and texture. Sauteed vitaminna can be served as a side dish for beef, poultry, chicken or seafood, much like spinach, chard, collards or any other dark leafy green.

Feel free to add few splashes of pepper vinegar or hot sauce to your greens, like many folks do here in the South. 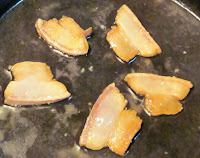 *If you don't have fatback, you can use thick-cut bacon

Cook the fatback in a large, heavy skillet (cast iron is ideal) until browned and crisp.

While the fatback is frying, thoroughly wash the vitamin greens under running water and shake off excess water. Cut off the root end from the bunch and discard. Cut the stems at the base of the leaves, then chop like celery and set aside. Coarsely chop the leaves -- I grab several at a time and roll lengthwise (parallel to the stem) like a cigar, hold with one hand and chop crosswise (perpendicular to the stem) with a sharp knife. 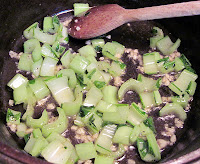 When the fatback is crisp, use tongs or a fork to transfer onto paper towels. If you have more than about 2 or 3 Tablespoons of rendered fat in the pan, pour out the excess (I reserve in a lidded container, along with bacon fat, and store in the refrigerator for other recipes).

Add the garlic and the chopped stems to the fat that's left in the skillet and fry over medium heat until the stems are tender and the garlic is fragrant and light golden brown. 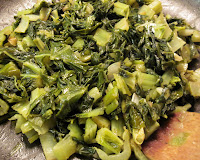 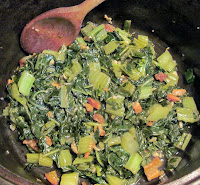 Stir in the chopped leaves and cook, stirring frequently, until wilted. Squeeze the juice of half a lemon over the greens, stir, cover, reduce heat to low and let cook until the greens reach desired tenderness (about 5 to 10 minutes).

Uncover, stir in the fatback, taste the greens and season to taste with salt & pepper. If there's too much liquid in the pan, you can raise the heat to medium or medium-high to evaporate it -- frequent stirring will speed this up.

Serve immediately alongside steak, pork chops, roast beef, fried or grilled chicken, fried or broiled fish or seafood, or with any other entree. Complementary sides include corn on the cob, mashed or boiled potatoes, baked potato or sweet potato, green beans, succotash, fried okra, hush puppies, or other similar Southern or country style side dish. 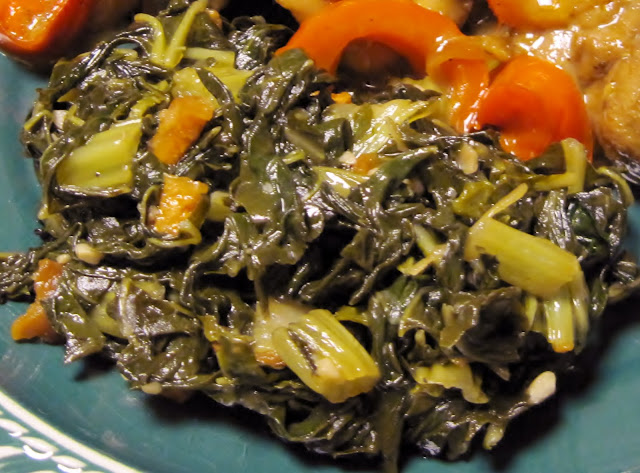