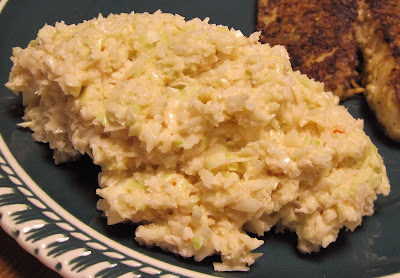 Most Piedmont or Lexington style slaw is tinged with red because of the tangy-sweet tomato & vinegar-based Lexington/Piedmont (aka western NC) barbecue sauce that dresses the grated or finely chopped cabbage. While you might encounter an occasional barbecue joint that serves a Lexington red slaw made with a little mayonnaise, that's generally the exception in the middle (Piedmont) and western parts of North Carolina.

The following slaw recipe is based on one for "Lexington Red Slaw" in the book Smoke & Spice by Cheryl and Bill Jamison. Much to my surprise upon first encountering that recipe, it called for a full cup of mayonnaise! My version cuts that excessive (IMHO) amount down to a half-cup plus 1 Tablespoon of mayo. I also made a few other tweaks including doubling the amount of ketchup and omitting the sugar. The result, while tasty, is not what I would call authentic Lexington slaw like the tangy-tart red slaw I ate when I lived in Winston-Salem for 5 years, but it's certainly closer than the original recipe in the book. For starters, both recipes produce a slaw that is far too creamy and more pale pink in color than the jaunty red slaw commonly served in the Piedmont. On the plus side, the creamier mouthfeel and mellower flavor probably makes my Pink Creamy Lexington Slaw far more palatable to Northerners used to creamy deli coleslaw and to anyone else who objects to the sharp vinegar-tomato flavor of true Lexington Slaw.

I served this Pink Slaw (trust me, it was more pink than the "peach" shade of the photo) as an accompaniment for parmesan-crusted fish, my low-carb alternative to breaded fried fish. The natural pairing for any Southern slaw is with barbecue, be it pulled or chopped pork, smoked ribs, or any other hearty smoked or grilled meats. You can also enjoy this slaw with grilled, smoked, roasted or Southern fried chicken, on burgers or hot dogs, and with other standard picnic and cookout fare.

I'll keep working on my own recipe for REAL red slaw, the kind they serve in Lexington, NC, and other parts of the Piedmont. In the meantime, I hope you'll give this tasty hybrid slaw a try.

*For a spicier slaw with a peppery kick, use Jim's Own Hot BBQ Sauce instead of the mild Homestyle, and/or a spicy ketchup.

Remove any bruised or wilted leaves from the cabbage, cut into quarters and cut out core from each wedge. Use a box grater or food processor to grate or finely chop the cabbage. Combine the remaining ingredients in a lidded jar, close the jar tightly and shake vigorously until thoroughly combined into a creamy pink sauce. Place the grated or chopped cabbage in a large bowl, pour the sauce over the cabbage and stir with a large spoon or spatula to combine thoroughly. Cover and refrigerate for at least an hour or overnight -- the flavors will develop and improve the longer the slaw sits in the refrigerator. Consume within a few days. Makes a good 8 or more servings.