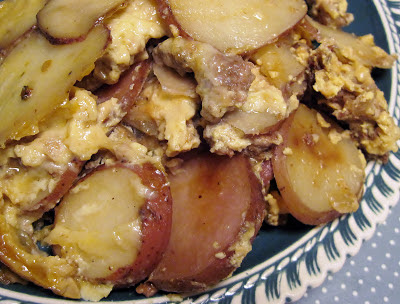 Sometimes an ugly-looking meal can charm and satisfy the other senses despite being visually underwhelming.

Such is the case with my Southwestern Breakfast Casserole cooked in my crock pot.

This hearty casserole will feed a hungry bunch of people and is especially popular during the colder months, but just as satisfying any other time of year. It's a great weekend brunch recipe because you prep all the ingredients the night before and cook the casserole in your crock pot or slow cooker overnight (8 to 10 hours on Low), and it'll be waiting for you when you get up in the morning!

The original recipe that inspired me to use my crockpot for cooking breakfast eggs with potatoes, meat & eggs is called "Cowboy Breakfast Casserole."  I changed up the ingredients a bit for a spicier flavor, got everything ready to cook in the crock pot, and then crossed my fingers for success because I had researched similar recipes online and people either loved or hated them. While most people had positive feedback on the original recipe and similar ones, the haters seemed to share a common complaint: Apparently their results were dried out and overcooked to the point of being inedible after 8 to 10 hours of cooking. From what I could gather, apparently some of the newer slow cookers either cook too quickly or at too high a temperature even on the "Low" setting and therefore might not be good for overnight cooking. 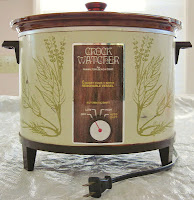 Out of an abundance of caution and in order to avoid having to throw out the results (I hate wasting food, especially when using organic ingredients), I started my Southwestern Breakfast Crock Pot Casserole in the morning on a Saturday so that I could check it beginning at the 4-hour mark and, if all went as promised, enjoy it for dinner after a total of 8 to 10 hours of cooking.

I'm happy to report that the casserole did indeed take over 8 hours to cook in my old crock pot, and probably would have been just fine after 10 hours of cooking, too. So if you have an older-model crock pot such as my Grandma Gert (shown here on the right), you should be fine letting this recipe cook overnight. Regardless, you might want to do a test run during the day if you don't mind having breakfast for dinner (it is a meat and potatoes recipe, after all).

This breakfast casserole is especially nice with a little salsa, a spicy hot sauce, or a good ketchup that's not overly sweet.

*If you're not sure how to do this, you can read my instructions for roasting dried chilies and for using dried peppers

Season the potatoes with a little salt & pepper to taste then saute in a large skillet with two Tablespoons of olive oil until just slightly softened; transfer potatoes to a bowl and set aside. Add the onion to the oil left in the pan, adding a little more oil if needed, and saute until translucent. Add garlic & peppers; saute for a couple of minutes until just tender.

Add the lean beef or venison to the skillet, sprinkle with the barbecue seasoning and cook, stirring regularly, until browned. If necessary, drain off fat (I used very lean grass-fed beef that hardly rendered any fat and thus draining wasn't necessary). Set aside -- I used a slotted spoon to transfer the browned beef mixture into a bowl, leaving behind any excess fat in the skillet.

**At this point, you could refrigerate the softened potatoes and the meat mixture until you are ready to assemble and cook the casserole at a later time.**

Before assembling the casserole:  Beat together the eggs with the milk and salt & pepper to taste. Grease the inside of your slow cooker or crock pot with butter, cooking spray or other fat (I used a very light smearing of bacon fat).

Cover and cook on LOW for 8 to 10 hours until the eggs are set and the potatoes have cooked through. Below is a photo of how the casserole looked when it was ready to serve, after about 8 1/2 hours of cooking: 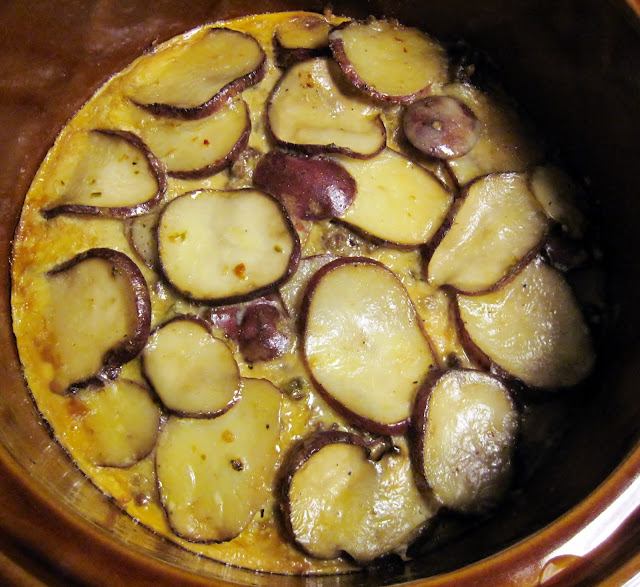 Serves 8 to 10, and you can refrigerate any leftovers (they'll look even uglier the next day but the flavor will be just as good after reheating).

Tip: If the top of your casserole has some excess fat pooled on the top or around the edges, use a paper towel to blot gently before serving.