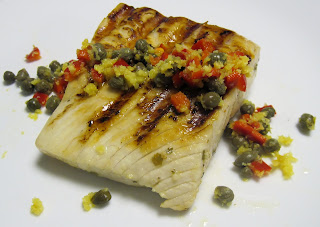 I have a childhood confession: Other than bacalao, Mom never cooked fish unless it came from a box labeled "Gorton's" or "Mrs. Paul's." The only tuna I ever had came from a can, and I never even tasted salmon, much less anything more "exotic," until I went to college. It struck me as odd that, having lived in the island nation of Cuba until her 30s, my mother only knew one fish recipe, and it was for salt cod rather than fresh fish. Apparently her parents had preferred meat and poultry, and my mother never learned how to make any fish dishes other than Bacalao a la Vizcaina. I've since learned that there are plenty of fresh seafood dishes in Cuban cuisine. I came up with the following recipe based on my experience cooking and eating authentic Cuban food, reading Cuban cookbooks and being familiar with the ingredients and flavors used in traditional Cuban dishes.

For best results, use 1/2" to 3/4" thick fillets of a firm white fish like grouper, mahi-mahi, cod or halibut (I used amberjack, which worked fine but had a bit of a strong taste). Swordfish would probably also be a good choice. My recipe makes two generous servings but can easily be doubled.

Because citrus juice will "cook" fish (that is how ceviche is made), don't marinate for longer than 30 minutes or else the fish will dry out and toughen during grilling. Although I used lemon in my recipe, you could certainly substitute fresh lime instead. Finally, be sure to grill over indirect heat and remember to remove the fish from the grill a couple of minutes early while it's still not yet fully cooked--the residual heat will finish cooking the fish after you remove it from the grill. The fish in the photo was actually grilled indoors on our George Foreman grill, which did an excellent job and even produced nice sear marks.

Zest the lemon and set aside the zest, then squeeze the juice from half the lemon into a small bowl. Whisk in the remaining marinade ingredients. Place fish in a shallow lidded container or in a resealable plastic bag, pour in the marinade, cover/seal and gently shake to cover fish completely in marinade. Marinate in refrigerator for 15 to 30 minutes (max). While the fish marinates, combine the garnish ingredients in a small bowl. Make sure your grill grates are clean and well-oiled, then preheat grill to medium-hot. When ready to grill, remove fish from marinade and place fish on grill over indirect heat. Cover and cook for a few minutes, then carefully flip over and continue grilling until fish is *almost* done (the center doesn't yet flake). Remove from grill and let rest for a couple of minutes while the residual heat finishes cooking the fish. If it's still not done in the center, you can carefully place it back on the grill for another minute or so (or pop it in the microwave for 30 seconds), being careful not to overcook! To serve, place fish on plate and spoon some of the garnish on top.