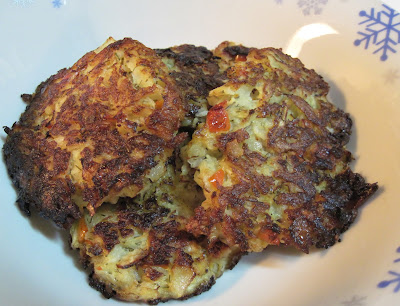 Hanukkah begins tomorrow Saturday at sundown. Many Jews, and even some non-Jews like me, enjoy traditional foods like latkes to celebrate the 8-day Festival of Lights.

My latkes, however, are not your Jewish Grandmother's latkes--unless, of course, your Grandma didn't mind breaking with tradition and using something other than potatoes when making latkes for Hanukkah.

My turnip latkes can be tricky to flip during frying if you make them too big, so I recommend making lots of little latkes using no more than tablespoon of the mixture, instead of the traditional larger-size pancakes. Another way to make them easier to flip as well as fluffier in texture is to place the shredded turnips together with the remaining ingredients (except the frying oil, of course) in a food processor and process until smooth, to make a pourable "batter." But if you prefer old-fashioned texture, stick with the shredded turnips and use some TLC when turning in the frying pan--and you can add a couple of tablespoons of fine breadcrumbs or matzoh meal to the mixture to help them stay together during frying and flipping.

The smaller and younger the turnips you use, the sweeter and milder the flavor. Older, larger turnips can have a sharp or bitter tang that kids and more sensitive palates might not appreciate.

Turnip latkes are equally delicious with applesauce (apples and turnips are a natural pairing) or with sour cream.

Shred the turnips into a large bowl, then add remaining ingredients EXCEPT oil and mix well to thoroughly combine. 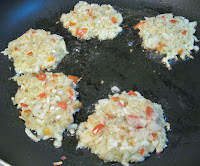 Pour oil about 1/4" deep in a large frying pan and heat over medium flame. Test the oil by adding a tiny bit of butter: If it sizzles when it hits the oil, it's hot enough. Drop the turnip mixture into the hot oil with a tablespoon, using the back of the spoon to flatten and making sure you leave space between the latkes (you will need to fry in batches). Fry until set and the edges turn golden--this takes several minutes and I like to cover the pan to help them set faster.

Carefully flip the latkes over to fry on other side for a few minutes until golden. Use a slotted spoon to transfer onto paper towels to drain--you can keep hot in a warm (200°F) oven until all the latkes are fried. Serve hot with apple sauce and/or sour cream. Makes about two dozen small latkes or about 15 regular-size ones.