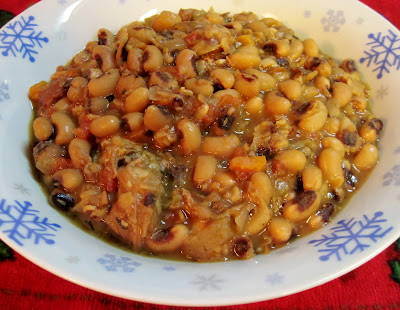 Black-eyed peas are a New Year's Day tradition in the South, usually served with a side of collards or other greens for good luck and prosperity in the coming year. I've heard it said that the peas represent coins and the greens represent paper money. I'm not sure what, if anything, the traditional side of cornbread is supposed to represent, but it's useful for mopping up the "pot likker" from the greens and the peas.

There are probably as many different versions of Hoppin' John as there are cooks in the South. Although I usually use fresh, frozen or (as a last resort) canned black-eyed peas to make Hoppin' John on the stove, this time I decided to do a "test run" using dried peas cooked all day in my crock pot with the ham bone that we had saved from Christmas dinner (normally I use bacon or fatback or even some chopped country ham, and in my vegetarian days I simply omitted the meat). One advantage to cooking the dried peas in a crock pot or slow-cooker is that you don't need to soak them overnight, which also means you won't lose any nutrients as a result of soaking and dumping the soaking water.

The following recipe is only mildly peppery. If you like hot and spicy foods, just add more jalapenos or other hot peppers, and/or a few splashes of hot sauce. And if you're sensitive to even the mildest spiciness, simply substitute an equal amount of bell pepper or other sweet pepper for the jalapeno.  A ham hock can be substituted for the ham bone, too. Finally, depending on your slow cooker or crockpot, it might take about an hour longer or shorter to cook, which is why I recommend checking after 6 hrs. 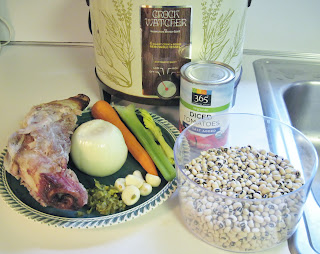 Combine all ingredients except the salt in your crock pot or slow cooker, making sure the peas are completely covered by the water (add a little more water if necessary). Cover and cook on High for 6 hours. Uncover, stir and check peas for doneness: 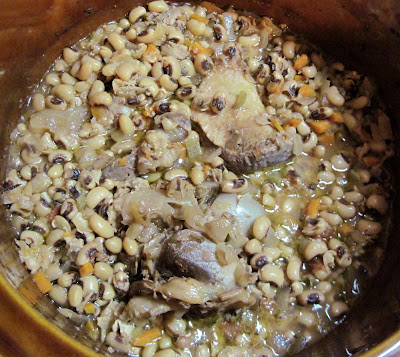 Although the ham bone had separated into its components after 6 hours, the Hoppin' John was still a little bit soupy and the peas not quite tender enough, so I turned the heat down to Low, covered and cooked on Low for another 2 hours. When done, most of the water should be absorbed and the peas should be very tender but not mushy (see photo at top of post). Stir, taste for balance and add salt if/as desired: Because I used a ham bone from an uncured, unsalted ham that we had smoked with a sweet mustard glaze, I ended up adding 1 1/2 tsp of Kosher salt.  If you use a country ham bone or hock, you might not need to add any salt.  Serves 6 to 8, and freezes well. 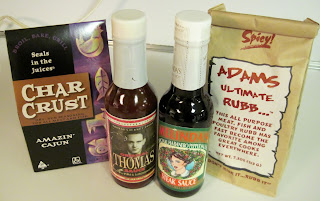 PS:  On New Year's Day, make sure to visit the Carolina Sauce Company on Facebook and look for our January 1st Crock Pot Game post. Leave a comment there, and you'll be automatically entered for a chance to win this Prize Pack (shown on right) with Char Crust Amazin' Cajun Seasoning, the original Thomas Sauce, Melinda's Habanero Steak Sauce, and Adams Ultimate Rubb!