Greg's First Attempt at Smoked Ham: A Delicious Plan B 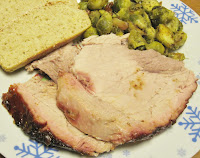 A few days before Christmas, Greg announced that he wanted to have smoked ham for our Christmas dinner, and wanted to smoke it himself. The plan was to purchase an uncooked, uncured ham which would not only feed us on Christmas, but would also produce plenty of leftovers to serve as our "cold cuts" or sandwich meat for many future meals. So, after purchasing said ham--actually, the shank half of a full ham, because the entire ham weighed over 30 lbs and was way too large--Greg promised that he'd research the process of turning this 17 lb behemoth into dinner and deli meats and that everything would go smoothly on Christmas Day. Unfortunately, Greg waited until fairly late on Christmas Eve to begin his research, and discovered that to achieve said results, he should have begun curing the ham a few days prior to smoking it.

And thus Plan B was born, aka Smoked Ham Roast...  and luckily, it was a magnificent success even if not what he had originally intended to make. And we did end up with plenty of leftovers for future sandwiches, recipes and meals, albeit not in the form of deli cold cuts.

The following is how Greg made a mouthwatering smoked ham "roast" with a homemade brown sugar and mustard glaze, using an uncured and uncooked ham.

The first step--after firing up the smoker and getting it up to 250°F--was to score the top and sides of the ham with a sharp knife, cutting through the layer of fat. This would allow the glaze to penetrate the ham. Greg saw no point in scoring the bottom side of the ham resting on the smoker grate. 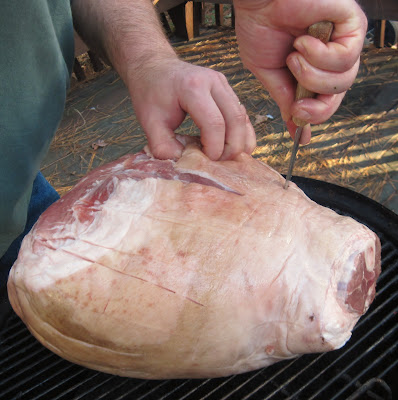 Next, he slathered the top and sides (but not the bottom) of the scored ham with Dijon mustard: 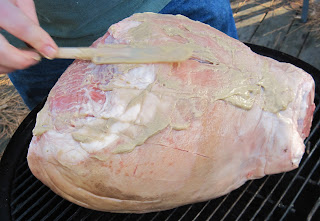 Then, he lightly rubbed a generous quantity of brown sugar onto the mustard-slathered top and sides of the ham: 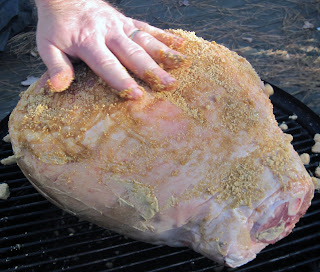 After that, he left the ham alone for 3 hours, periodically checking the temperature gauge on the smoker and adding more natural-wood lump charcoal as needed to keep the smoker temperature at 250°F (he started the lump charcoal in a charcoal chimney to turn it into coals before adding to the smoker, and continued to add more coals as needed during the entire 10-hour smoking time). Here's what the ham looked like after 3 hours (I requested the photo op; otherwise he wouldn't have checked until the 4-hour mark): 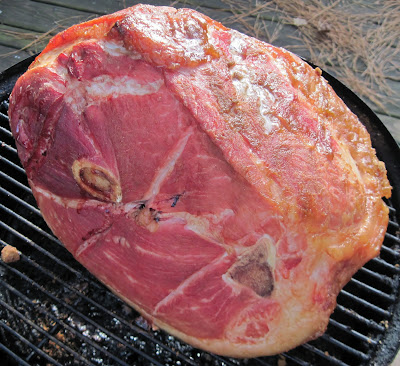 While the ham began to cook, Greg made the glaze using approximately 3 tablespoons of mustard (we ran out of Dijon so he used some Lusty Monk Mustard, a spicy whole-grain mustard that's made in NC) and 1/2 cup of brown sugar, mixed together to make a paste. Around the 4-hour mark, he coated the top and exposed sides of the ham with this paste, then covered the smoker to let it keep cooking. The goal was to get the internal temperature of the ham to 170°F, and it wasn't anywhere near that after 4 hrs. 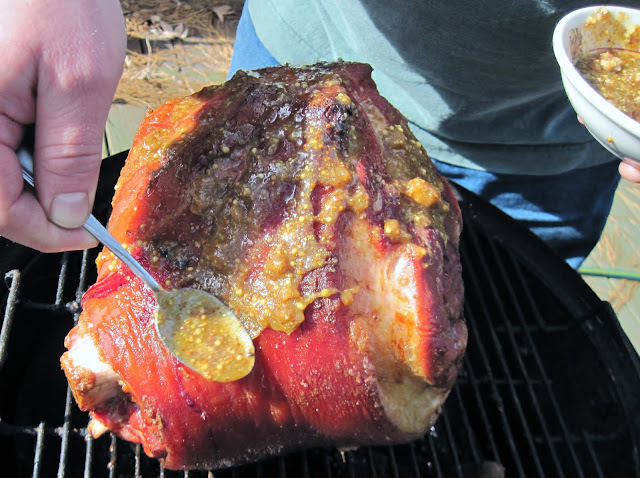 He next checked the ham's internal temperature at the 5 1/2-hour mark as it inched closer to 170°F, and this is what the ham looked like: 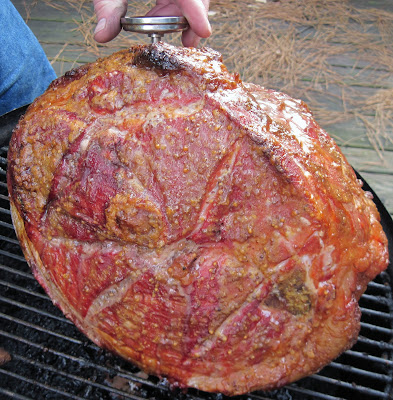 Around the 8-hour mark, Greg checked the ham again and applied more of the brown sugar & mustard paste, mixing up more as needed using the same ratio above. The internal temperature was close to 170°F, so he figured the ham would be done in another 2 hours for a total smoking time of about 10 hours. Here's what it looked like at the 8 hour mark (uncut side view): 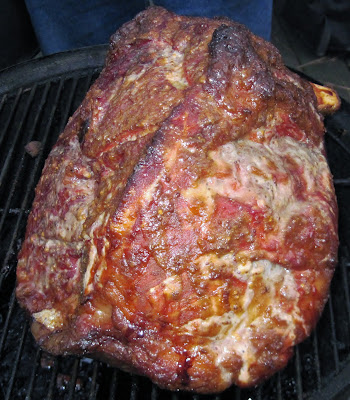 Greg's guess was right and the ham hit 170°F around the 10-hour mark. Unfortunately I wasn't able to get a photo of it on the smoker at this point. After removing it from the smoker, Greg let the ham rest for 15 minutes before slicing into it. Here's how it looked as he sliced--you can see the pink smoke ring under the glaze "bark" and the wonderful juiciness of the ham: 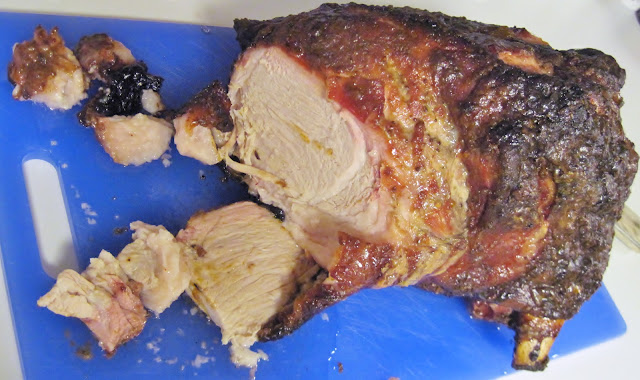 We served the ham with my Roasted Garlic & Horseradish Brussels Sprouts and a couple of slices of my homemade bread, as shown in the very first photo at the top of this post. In this enlarged view, you can see the pink smoke ring much better: 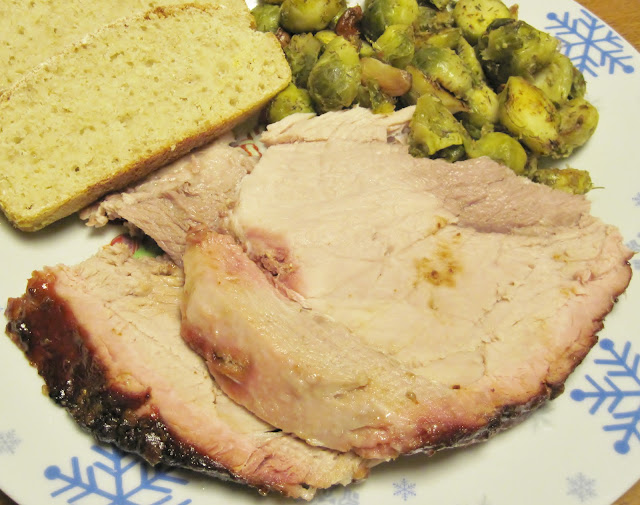 Personally, I preferred the subtly smoky-sweet flavor and succulent, juicy tenderness of this ham over any cured ham, and it was far more delicious than any commercially smoked ham, too. Sure, it was work for Greg, but he said the incomparable flavor was well worth it. Not only did we eat well on Christmas, but we have quite a few vacuum-sealed packs of leftover ham in the freezer, along with the crispy top layer of crispy glazed fat/bark (I think I can chop it and use to season green beans, baked beans, etc. - at least it's worth a shot), and the meaty ham bone that I later used to make Crock Pot Hoppin' John in a test-run for our New Year's Day dinner.

Greg plans on making smoked ham again after we've eaten all of the leftovers, but using the original Plan A, i.e., either curing the ham himself prior to smoking it, or buying an already naturally-cured but uncooked ham. So, stay tuned for Plan A.... although I certainly wouldn't mind if he made Plan B again.