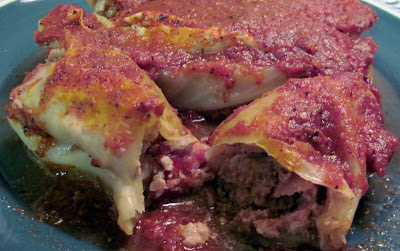 Greg is an unabashed meat-lover and his metabolism works best when he avoids processed foods and carbohydrates while concentrating his caloric intake on protein, natural fats and low-glycemic vegetables like cabbage and other greens.

Greg also loves German food, and he came up with the following recipe as a lower-carb alternative to Kohlrouladen, traditional German cabbage rolls. He boosted the flavor of the original version by substituting tomato sauce for the traditional broth, and came up with a carb-free savory meat filling that omits the bread crumbs and adds an extra egg instead. If you follow a low-carb diet or are cutting your carbohydrate intake, this recipe is for you. And even if you're not, it's mighty tasty and sure to satisfy a hungry, carnivorous family.

Because Greg made these meaty cabbage rolls "on the fly," most of the ingredient amounts aren't precise. Don't worry about it, because exact amounts don't matter here. Use your good judgement and your taste preferences when seasoning and saucing, and don't sweat the details because it's really hard to mess up this recipe.  And while it does take some time to assemble the cabbage rolls, you can do that up to a day in advance, refrigerate and then bake the next day.

Tip: If you end up with extra cabbage leaves after you've used up all the meat filling, simply refrigerate the extra leaves for another recipe. Some ideas include chopping them up to add to other greens, or chopping and seasoning for omelets, quiche or frittata, or even using as low-carb "wraps" much the way large lettuce leaves are used.

*Bacon ends are the thick, chunky trimmings from a slab of bacon. If you don't have any, you can probably use other similar thick-cut pork belly meat.

Bring a large pot of salted water to a rolling boil - make sure you've left enough room for the cabbage head. Trim the cabbage by removing any wilted or discolored outer leaves and cutting out the core. Place the cabbage into the boiling water and boil until tender but not falling apart. Drain into a colander and rinse the cabbage with very cold water until cool enough to handle - this also stops the cooking process so that the leaves don't get mushy. Peel off the leaves and rinse individually to remove any grit. Shake off excess water and set leaves aside in colander to allow remaining water to drain off. 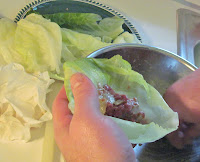 Cut the bacon ends into small chunks then fry in a large, deep skillet until cooked through (you can do this while the cabbage boils). While this is cooking, season the ground beef to taste with oregano, garlic powder, salt & pepper, then mix together with eggs in a large bowl. When the bacon ends are done, remove from pan to drain on paper towels, reserving the rendered fat in the skillet.

To assemble the cabbage rolls, place about 2 Tbs of ground meat and about 1 or 2 tsp of chopped bacon ends in the center of each cabbage leaf, then roll the leaf like a burrito as shown on the left.

Carefully slide the rolls into the hot bacon fat in the skillet with the seam side down in the fat so that they seal as they cook, and lightly brown over medium heat. You'll work in batches so as to not overcrowd the skillet. Carefully turn the rolls over to lightly brown the other sides. 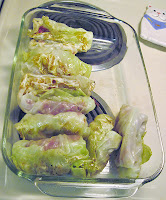 As they're done, transfer the browned rolls seam-side down into a large (13x9x2) baking dish. You want them tightly packed in a single layer.


When the baking pan is full, pour enough tomato or pasta sauce over the cabbage rolls to cover. At this point, you can refrigerate the pan until ready to bake. 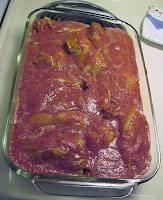 When ready to bake, remove pan from refrigerator (if you made ahead), preheat oven to 350°F.

When oven is ready, bake the cabbage rolls for about 1 hour at 350°F.

To serve, carefully spoon the rolls out onto individual plates, about 3 to 5 roller per person, and spoon some of the sauce from the pan over the served rolls.

Refrigerate any leftovers and reheat to enjoy.