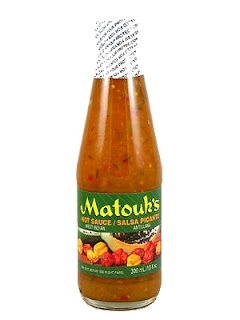 You've probably heard the saying, "The more things change, the more they stay the same."

Such is the case with our list of Best-Selling Sauces for August at the Carolina Sauce Company. Not only did some of the same sauces continue their reign on the list, but several held on to the same position they had in July. At the same time, however, we had a few eye-opening newcomers that sold surprisingly well last month, and we had a couple of ties, too.

The following is the complete list of August's top-selling sauces and seasonings. We've updated the list on the Carolina Sauce Company home page where we always show the current list, but for your convenience I've included short reviews of each product below. For additional information or to purchase one or more of these zesty condiments, just click on the product name or its photo.

1. Matouk's West Indian Hot Sauce: This festively fruity and fiery scotch bonnet hot sauce from Trinidad & Tobago is our all-time best-selling hot sauce, and rarely does a month go by when it's not on the top-ten list. Juicy sun-ripened papayas add tropical sweetness that complements and moderates the flaming heat of the scotch bonnet peppers, making Matouk's West Indian Salsa Picante an excellent choice for poultry, seafood, veggies, rice & bean recipes, and other savory dishes. 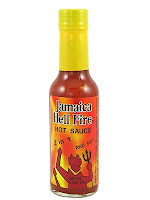 2. Jamaica Hell Fire 2 in 1 Hot Sauce: Holding on to second place for another month, this peppery concoction of select Jamaican chilies and tropical spices is a versatile all-purpose table sauce that will spice up any savory food. It's also handy in any recipe calling for hot sauce, making it a favorite of chefs and cooks who appreciate spicy heat that doesn't burn you out.

3. Wells Hog Heaven BBQ Sauce: The vinegar barbecue sauce of choice for connoisseurs of genuine eastern NC barbecue, Wells is our top-selling product of all time across all categories (despite finishing in third place for the past two months). If you want to experience authentic Carolina barbeque at home, all you have to do is smoke a Boston (aka pork) butt low and slow until it pulls apart with forks, then splash on this sauce. Take a bite, and you're in Hog Heaven!

4. Matouk's Calypso Sauce: For the third consecutive month, Matouk's Calypso holds steady in the fourth slot on our best-seller list. Similar to Matouk's West Indian but a bit hotter and less sweet without the papaya fruitiness, the distinctive flavor and fire of aged scotch bonnet peppers and the tang of mustard take center stage in this traditional-style tropical hot sauce. 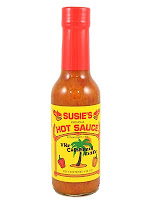 5. Susie's Original Hot Sauce: Perhaps the best-known export from the tiny island of Antigua, Susie's hot sauce is a straightforward vinegar & mustard hot pepper sauce that's savory and tangy without any fruitiness or sweetness. What makes it stand out from run-of-the-mill hot sauces is the special secret blend of spices and expertly selected local chilies that Susie uses to this day in her original recipe.

6. Walkerswood Traditional Jamaican Jerk Seasoning, Hot & Spicy: Fans of authentic Jamaican jerk cooking can't get enough of this fiery wet rub. Made with traditional Jamaican jerk spices and herbs plus plenty of scotch bonnet peppers and fresh scallions, this highly concentrated paste is both exotic and yet inviting in its aromatic fragrance and jaunty flavor. Apply judiciously to anything from pork, beef, lamb or goat to chicken, fish, or even potatoes, let marinate in your fridge for at least an hour or more, then dive into the flavors of Jamaica! 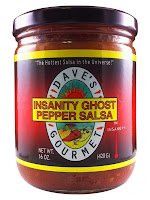 8. The eighth slot goes to another tie, this time between two newcomers to our best-seller list: Dave's Insanity Ghost Pepper Salsa, one of the hottest salsas on the market because it's made with an insane amount of jolokia chiles (aka ghost peppers), and the much milder but nevertheless respectably hot El Yucateco Jalapeno Hot Sauce, a genuine Mexican hot sauce that makes the most out of zippy green jalapeno peppers. If you enjoy cooking Mexican, Tex-Mex or Southwestern foods at home, or are looking for a reliable everyday medium-heat hot sauce to liven up breakfast eggs, lunch sandwiches, dinnertime meals, and favorite noshes like pizza, hot wings, chili, nachos, dips for chips, etc., you won't be disappointed with this green jalapeno hot sauce. 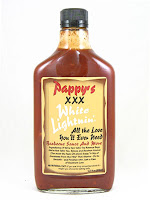 10. Completing our August list is another vinegar BBQ Sauce from eastern North Carolina, Scott's Barbecue Sauce. Similar to Wells Hog Heaven but spicier and with no sugar or other carbs, this deceptively simple combination of vinegar, pepper and salt somehow manages to work magic with pulled pork BBQ or "pulled" chicken BBQ. It's also a tangy-hot marinade for chicken and venison, and a zesty alternative to pepper vinegar for seasoning collards and other cooked greens.