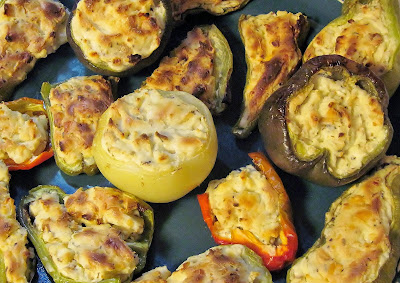 This recipe was born out of necessity. The original plan was for Greg to grill the stuffed peppers, but a lengthy and torrential downpour made outdoor cooking untenable. I therefore fired up the oven and prayed for edible results (given the cranky nature of my oven and my lack of experience cooking cheese-stuffed peppers, my expectations were low).

Much to our delight, the oven-baked cheese-stuffed peppers were a smashing and zesty success, and far easier to make than grilled ones because there was no risk of flare-ups. Although the baked peppers didn't develop the subtle smokiness or caramelized charring that grilling makes possible, baking provided a magnificently mellow, roasted flavor with hints of natural sweetness that was equally satisfying in its own way. There was no problem with cheese oozing out of the peppers, and the filling was nicely golden on the surface and perfectly melty-hot inside. Needless to say, we plan on cooking cheese-stuffed peppers in the oven again. 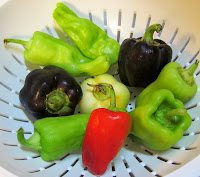 The quantities in the following recipe is completely adaptable to your tastes and how many peppers (and their sizes) you have on hand. We had a quart of mixed mild smallish peppers (9 total) and ended up with about 1/4 cup leftover cheese filling, which we refrigerated for later use as a spread for a bagel or crackers, or perhaps with raw celery and carrot sticks. In the past Greg even has used leftover cheese filling in omelets. So if you have a lot of peppers to stuff, be sure to err on the side of making too much filling rather than not enough because it won't go to waste.

*If calories and/or fat are a concern, I recommend using Neufchatel cheese rather than fat-free cream cheese because the latter won't melt as well.

**You can buy containers of already-roasted garlic in the deli or produce section of better supermarkets if you don't have time to roast the garlic yourself. I usually buy fresh raw peeled garlic cloves to roast in my oven or for my time-saving stove-top "roasted" garlic recipe.

Preheat oven to 425°F and line a baking sheet or shallow pan with parchment paper or foil (I like parchment paper better for evenness of cooking and no sticking). Remove stems and seeds from peppers, and any ribs that are too big. For round or squat peppers that can sit upright, I cut the top off around the stem to create pepper "cups." For long peppers like Anaheims, poblanos, jalapenos or mini-sweets, I slice in half lengthwise.

Combine the remaining ingredients in a small bowl -- I use a fork to "mash" everything together. Spoon this filling into the peppers, place the peppers on the lined sheet or pan and bake at 425°F until the cheese is golden on top and the peppers are soft, about 15 minutes (keep an eye on them after about 13 minutes, especially if your oven is quirky like  mine).

What's your favorite filling for stuffed peppers? Tell us in a comment below.

PS: If you are addicted to hot & spicy foods and are brave enough to eat the hottest peppers on the planet, I recommend Dave's Gourmet Whole Ghost Peppers, on sale now at the Carolina Sauces online store. You can chop or slice them like you would jarred jalapenos or other such peppers: For topping nachos, adding to sandwiches or salads, stirring into dips or salsas, and using in chili and other recipes.