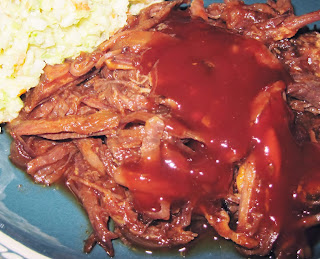 If you're a purist, you will object to my calling this "barbecue."

Normally I'm in agreement: Proper barbecue requires slow-cooking for hours in a smoker or BBQ pit. And if you're a North Carolina native, it ain't barbecue if it ain't pork.

But if you insist on either of those positions, you're missing out on some good eats.

As Texans know, beef can make some mighty fine barbecue.

And sometimes using a smoker simply isn't practical, such as during gale-force winds or when you don't even own a smoker.

This recipe is for those times, and for any other time you're craving BBQ but want the convenience and ease of cooking barbecue (or a reasonable facsimile thereof) in a crock pot or slow-cooker.

Admittedly, a crock pot won't give you that genuine smoke flavor that's only possible from real wood. But you'll still have mouthwatering, juicy, fall-apart tender meat to serve on a bun or plate. And it's hard to get simpler than this recipe, which you can even start the night before.

*I used a very lean grass-fed sirloin tip roast that weighed 2 lbs. I'm sure you can use other types and sizes of roasts, but the larger the roast, the longer it will take to cook so plan accordingly.

**Use a beer you enjoy drinking but that's not too expensive. It's used as the cooking liquid to tenderize and lightly flavor the roast, and you'll end up pouring it off before "pulling" the meat. I used a bottle of Carolina Brewing Oktoberfest.

Place the onions and garlic in the bottom of your crock pot and place the roast on top. Pour in the beer, cover and cook on Low for at least 12 hours or on Alternating Hi/Low for about 10 hrs (I assume it will take about 8 hours on High but don't know for sure). The roast needs to cook until it pulls apart easily with two forks.

When the roast is pull-apart tender, transfer it to a large plate and drain off the beer into a colander over your sink -- yes, you're discarding the "used" beer and saving the cooked onions & garlic. Use two forks to pull apart the meat, discarding any pieces of fat or gristle and returning the meat to the crock pot along with the onions and garlic. Pour about 1 1/2 cups of barbecue sauce over the pulled meat, stir to combine, cover and cook on low until ready to serve. The meat should be saucy but not "drowned" in sauce. Serve on buns or plates with additional sauce poured on top if desired. Refrigerate any leftovers.