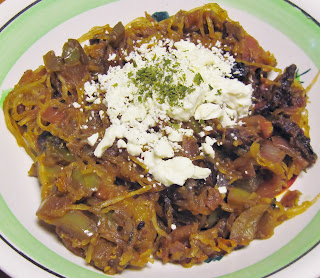 I came up with the following recipe after returning from the farmer's market with green (unripe) tomatoes as well as ripe ones, and discovering that I also had sun-dried tomatoes in my pantry. On a whim I also purchased a package of what looked like fatty bacon but was labeled "Hog Jowls." And spaghetti squash makes regular appearances on our dinner table as a low-carb, low-calorie alternative to traditional spaghetti made from wheat flour.

Now back to the hog jowls, which probably drew you to this recipe in the first place....

Traditionally used in the South to season black-eyed peas or greens when bacon was unaffordable and historically looked down upon by many as "poor folk's food," hipster foodies and popular chefs recently have elevated the lowly hog jowl to trendy gourmet status by renaming it "pork cheeks" and also calling hog jowls by their Italian name, guanciale.

Regardless of which name you prefer, hog jowls are often sold smoked and sliced like bacon, and look like very fatty bacon. Not surprisingly, they're similar to bacon in flavor and while fattier than bacon, pork cheeks are leaner than fatback. Because of their high fat-to-meat ratio, hog jowls are best used as a seasoning ingredient in recipes rather than a star.

If you can't find hog jowls, pork cheeks or guanciale at your local butcher, farmer's market or specialty store, simply substitute bacon when you make this spaghetti squash recipe. If after frying the bacon you don't end up with enough bacon fat to saute the ingredients for the tomato sauce, simply add a little bit of olive oil.

Cook the spaghetti squash until tender and you can pull the inside into strands: I cut the squash in half lengthwise and remove the seeds, then place cut-side down in a glass baking dish with 1/2" water and cook in my microwave oven until soft, about 15 minutes (you can also boil or bake the squash instead - just pierce a few times with a fork if cooking whole). While the squash cooks and then cools to the touch, you can make the sauce as described below. Once the squash is cool enough to handle, use a fork to scoop the insides out into a bowl, separating into spaghetti-like strands (discard the shells). Set the squash aside until sauce is ready.

For the sauce: Fry the hog jowls or bacon slices in a large, deep skillet or heavy-bottomed pot until crisp. Transfer to paper towels, reserving the rendered fat in the skillet (you'll want about 2 Tbs total; pour off any excess, or add a little olive oil if there's not enough fat). Saute the onions in the fat until soft, then add bell pepper & garlic and saute until soft. Add the tomatoes and cook, stirring regularly, until tomatoes begin to soften. Add the herbs & ground pepper, pour in 1/2 cup wine and stir to combine. Bring to a simmer and cook until the tomatoes are breaking down and much of the liquid has evaporated (about 15 minutes), stirring from time to time and lowering the heat if needed so as to not scorch the sauce. Slowly pour in the remaining 1/4 cup of wine while stirring to deglaze the pan, scraping up any caramelized bits that may have stuck to the surface of the skillet. Continue cooking until most of the liquid has evaporated and you have a chunky, thick sauce. Crumble in the cooked pork cheeks or bacon, stir and taste for balance, adding salt as desired. 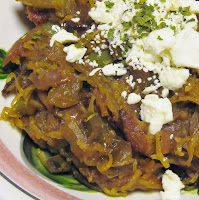 (1) Transfer the cooked spaghetti squash strands into the skillet with the sauce and gently stir until thoroughly combined, then serve with your choice of toppings if any. That's how I served it in the photos here, only to realize that it's rather dreary in color and not exactly attractive despite being quite pleasing to the palate (proving once again that ugly food can be "good eats").

For a prettier presentation with better colors, serve this way:

(2) Transfer the spaghetti squash strands onto a serving platter or individual plates, spoon the sauce over the squash, then finish with any of the optional toppings if desired. You'll have a cheery yellow base of spaghetti squash contrasted with and complemented by the dark reddish brown of the three-tomato sauce, and accented with the colors of any of the toppings. Add to the visual impact by serving on black or other deeply-hued single-color plates. 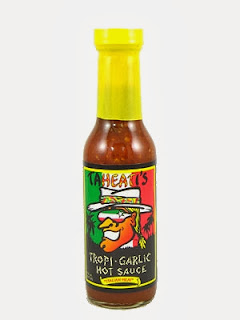 PS:  If you like hot & spicy foods and want to jazz up this recipe by adding some heat, I recommend splashing on a complementary hot sauce at the table. One good choice would be the Italian-inspired Tahiti Joe's Italian Heat Tropi-Garlic Hot Sauce, currently on sale at the Carolina Sauces online store. And if you'd like a special coupon code for an additional 5% off this hot sauce or any other Carolina Sauces products, simply leave a comment or send a PM (private message) on the Carolina Sauce Facebook page requesting the coupon and I'll send it to you (coupon is good thru midnight EDT on 9/30/13).