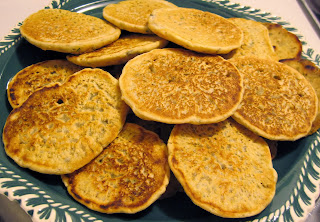 Assertive in flavor and savory-salty in spice, bacalaitos, aka codfish fritters, are a popular fried snack in Cuba, Puerto Rico and the Dominican Republic. While some "gringos" (Americans of Anglo descent) might consider them an acquired taste due to their unabashed fishiness, anyone who appreciates other fried seafood snacks like Chinese-restaurant shrimp toast or Asian shrimp chips likely will enjoy bacalaitos.

I grew up eating traditional Cuban bacalaitos, which are not spicy. Because of my love of spicy foods, however, I like to add a touch of red pepper or even a dash of habanero powder to my codfish fritters. If you want to omit the heat, feel free.

I urge you to open up your culinary horizons -- and your mouth -- and give these salt cod fritters a taste.  If you're on the timid side or simply enjoy dipping salty snacks in a complementary sauce, try them with anything from sweet & zesty barbecue sauce (e.g., Busha Browne's Honey Jamaican Jerk BBQ Sauce) to a zippy cocktail sauce, cool tartar sauce, or other favorite dipping sauce (a nice choice is creamy, spicy Tobago Keys Coral Ridge Seafood Sauce).

If you're going to make this recipe, keep in mind that the salt cod has to soak for a good 10 hours or more. Either start it in the morning on a day when you have time to change out the soaking water for the salt cod a few times during the day, or soak it overnight in the refrigerator, changing the water before you go to bed and again the following morning before you go to work, and then cooking the cod when you get home. 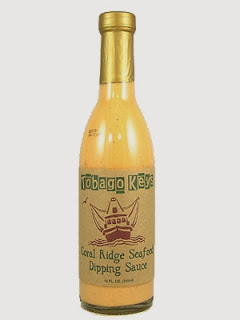 Prep & cook the salt cod:  Place in a bowl and fill with water to cover the fish, then cover the bowl, place in refrigerator and let the fish soak for at least 8 to 10 hours, changing the water at least twice. Drain, place soaked cod in a pot with enough fresh water to cover, and bring to a boil. Reduce heat and simmer 10 minutes, then drain and allow to cool to the touch. Use a fork and/or your fingers to shred as finely as possible, discarding any little bones you may find. 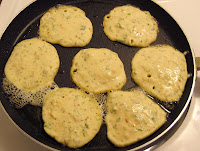 For traditional frying in oil: Pour oil to at least 1/2" depth in a large frying pan and heat to medium hot. Drop the codfish batter by the spoonful into the hot oil, making sure you leave plenty of room between the fritters, and fry until golden-brown on both sides, flipping over when the top is bubbly and the edges have set. Remove cooked bacalaitos with a slotted spoon and place on paper towels to drain. Serve hot.

For "low fat frying" using cooking spray: Spray a large frying pan with enough cooking spray to coat evenly. Heat over medium heat, then drop the codfish batter by the spoonful onto the hot skillet, making sure the fritters do not touch (they'll spread upon dropping so leave plenty of room). Cook until top looks bubbly and the batter has set, then carefully flip with a spatula to cook the other side for a few minutes until golden brown on both sides. Place cooked bacalaitos on paper towels to absorb oil, and serve hot.

Note: When frying in batches, you may need to add more oil or spray the pan with more cooking spray between batches, allowing pan to heat back up before frying the next batch.